“Event at home”
.
Show your privacy
.
Every living creature can join this event.
The purpose of da theater house and velengarda group is to invite you to treat your body and things around you differently and share your experience with others to feel alive on these Coronavirus pandemic quarantine days.
.
There is not only dance but also any other kind of performances is accepted in this event, even showing the body or visual arts and using tools around you.
.
“Cash awards “
There would be a cash award for top two winners.
.
“Event conditions “
•Performances should have 5seconds to 5minutes length.
•The film should be one take recorded(no cuts).
•Performances should have music.
•Performances should be sent in one week.
•Send your performances to 09364900566 whatsApp or Telegram or post it on your Instagram page and tag and direct message this page.
.
All performances will be shared as story in Da Theater house page on Instagram.
.
You can contact on Telegram or WhatsApp for further info:09364900566


Bára Sigfúsdóttir is an Icelandic choreographer and dancer who is based in Brussels and working internationally. Her teaching is derived from her personal and ongoing research as a choreographer and through this workshop she would like to share with you parts of her artistic universe and ways of working with movement.
Bára Sigfúsdóttir uses improvisation in a functional way for training the body; building strength, flexibility and coordination. She also uses improvisation for searching personal movement material which she then develops further in her work and performances. She wishes to inspire her students to explore and expand their own possibilities as performers, creators and active observers.
The workshop was organized by Da Theater House in collaboration with the Dayereh Festival Secretariat and the Afra Academy of Performing Arts on July 8 & 9 at the Noufel Luchato theatre house.
All participants received the certificate at the end of the course.
The workshop was led by Ms. Neda Notash.

Lilian Beidler | Switzerland
Lilian Beidler is a musician from Switzerland. Sound being a fundamental of her work, she explores different media and their influence on the perception of the human body and composition within a performative context. Using performative sound art as both a research method and an artistic tool she explores public space, intercultural communication and sociological topics to contribute to a discourse within a worldwide society.  She graduated with an MA Performance Making from Goldsmiths University of London/UK in 2015, also holding a Master’s degree in Contemporary Arts Practice from Bern University of the Arts in Switzerland, 2010. She was awarded the “Recognition award music” from the Canton of Bern/CH in 2015. Lilian is a lecturer at Bern University of the Arts.
#Lilian_Beidler #Switzerland #Rah #Residency #Iran #musician #Sound_art #performance_art #contemporary_art  #Bern #Tehran #201

Performance «being» by Bára Sigfúsdóttir from Belgium in Tehran

تیر ۹, ۱۳۹۸ no comments in News ، newsen by Anderiaa

As a poetic generator of subtext, the moving body can express different layers of sensations and experiences. In being, Bára Sigfúsdóttir uses this body as the common ground to explore and to put in dialogue the West-European with the Iranian identity. Rooted in an ongoing curiosity towards new cultures and the development of movement in different contexts than her own, Bára travelled to Tehran (Iran) in 2014 while she was teaching a workshop there, she got intrigued by the skills and presence of two local artists.

This planted the seed for being, a piece where Bára creates an onstage encounter for and with Iranian performers. For this performance the three of them explore the concept of ‘meeting’ and reflect on the West-European and the Iranian (and by extension the Middle-Eastern) culture and society. Their bodies serve as the common ground to depart from. The meeting between bodies, between performers on stage but also between them and the audience, serves as a sober gesture: a place to explore what we share rather than to underline our differences.

This performance will be performed in Tehran, in collaboration with the Nofelloshato and Da Theatre House’s Participation, and a two-day workshop will be held by Ms. Bára Sigfúsdóttir.. 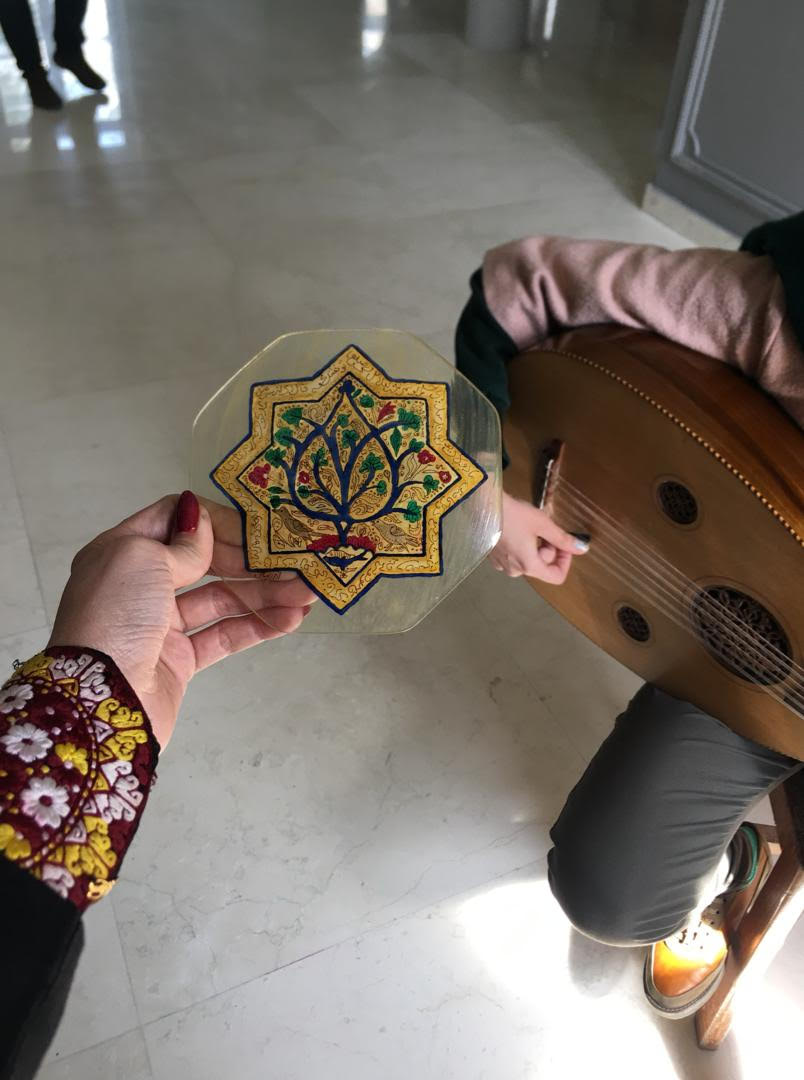 For the first time in the history of reverse painting on glass with music presented by Neda Notash (Idea maker & painter), Elnaz Notash (Oud player) and Zahra Mohamadie (singer) for the audience of the museum on 29 March 2019 (11 am up to 14:30).
During the performance Neda Notash (painter) answered to the audience’s questions and transferred her knowledge about the history of reverse painting.
This performance had positive feedbacks by the audiences and enthusiasts and holding these kinds of workshops is a continuous professional process in future by Glass Painting Museum.

Reverse painting on glass is an art form consisting of applying paint to a piece of glass and then viewing the image by turning the glass over and looking through the glass at the image. Another term used to refer to the art of cold painting and gilding on the back of glass is verre églomisé, named after the French decorator Jean-Baptiste Glomy (1711–۸۶), who framed prints using glass that had been reverse-painted.
This art form has been around for many years. It was widely used for sacral paintings since the middle Ages. In Iran, the art form had humble beginnings but gradually became popular in the royal court in the previous centuries. From then on, images of royal women and scenes of feasting or hunting appeared on the back of the glass. The  first known sample of reverse painting in Iran includes beautiful birds & flowers that were often depicted on mirror or glass their construction dates back to the Zand  period. Over the time,  in Qajar era ,the  painting  behind  glass  &  mirror  with  the  pattern  of  birds and flowers became popular 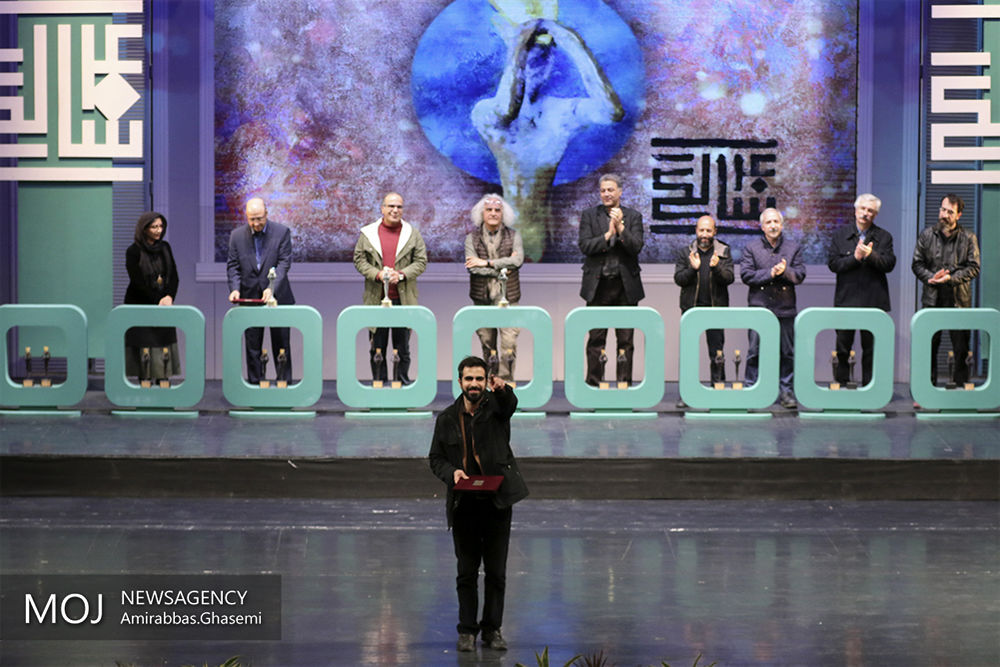 اسفند ۵, ۱۳۹۷ no comments in News by ایلیا 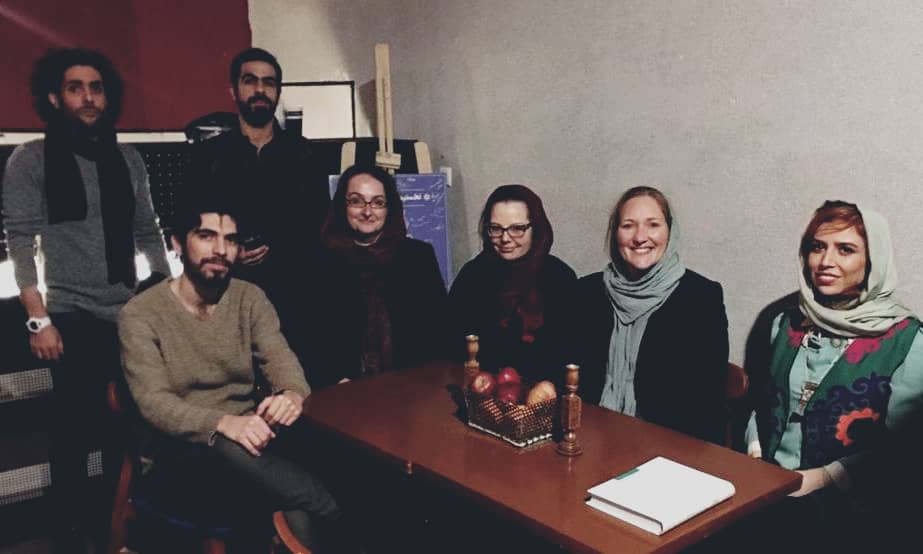 German tourists arrived in Da House Theatre. And in a meeting after welcoming them, Mr. Kasra Shahini Director of Da House Theatre and Mrs. Neda Notash Director of international department of Da House discussed with them about the history of Iranian art and its numerous branches, and tehran art tourism schedule and also the Fajr International Festival in Iran. Tehran Art Tourism is a project that designed by Mr. Kasra Shahini at 2018 and proposed to german agency “alsharq”.